A Celebration of Burgundy

You are here:
BurgundyFranceLa Paulee 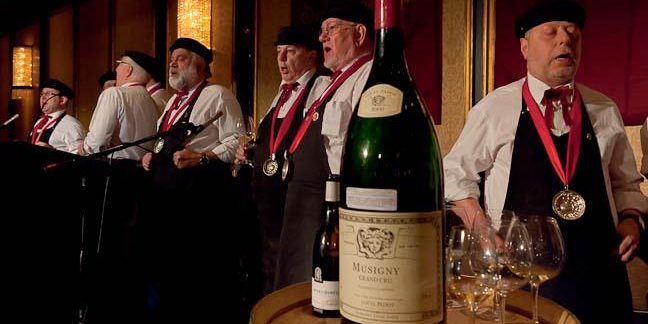 Beginning in 2000, La Paulée was brought to the US for the first time. Since then La Paulée has been celebrated in San Francisco, in New York, and in Aspen, Colorado. La Paulée de New York and La Paulée de San Francisco have received rave reviews by press and guests alike. In his review of La Paulée, Robert Parker noted, “Any Burgundy enthusiast who doesn’t jump at the opportunity to attend this event is crazy as it is a dinner/tasting of a lifetime.” This year’s festivities in San Francisco will begin on February 27 and conclude on March 3 with a grand tasting and gala dinner at San Francisco’s Fairmont Hotel.

We will be featuring the wines of Burgundy all month, but if you are looking for specific wines to open for your Paulée please don’t hesitate to contact us.

$1195/bottle
95-97 points, Wine Advocate
The 2014 Richebourg Grand Cru has a quite compelling bouquet, as one is getting accustomed to chez Grivot. There are pure dark cherries, red plum and boysenberry fruit here, infused with fine mineralité and that sense of aristocracy one seeks in a Richebourg. The palate is medium-bodied with supple tannin, wonderful acidity and beautifully integrated oak. There is great poise here, power hand in hand with elegance, a consummate Richebourg that will give a lot of pleasure over many years.

$199/bottle
92-93 points, Wine Advocate
Sourced from two parcels close to the chateau, the nose is just a little reductive and sullen compared to the others. But they will develop in time because the palate is wonderful with cherry, orange peels and wild strawberry notes. Structured, symmetrical with firm grip and brilliant focus. The nose was just beginning to wake up as I moved on to the next wine. Long, floral, cherry and strawberry sorbet finish.

$270/bottle
92 points, Wine Advocate
Tart but ripe black raspberry and cassis are allied to tobacco and singed meat in the Gros 2006 Clos Vougeot Le Grand Maupertui, which offers a flattering creamy richness yet an invigorating sense of vivacity. The bitter side of its black fruits, its meatiness, and stony notes gain prominence in the wine’s long, formidably intense, and positively frisky finish. Such a youthfully charming and enticing Clos Vougeot you won’t often encounter, although I am confident it will be worth following for at least a decade.

$198/bottle
93 points, Wine Advocate
Tasted blind at the Burgfest tasting in Beaune, the 2013 Clos de Vougeot Grand Cru felt rather stemmy on the nose, especially when compared to others in this flight, although it improves with aeration and gains cohesion. A hint of Earl Grey perhaps? The palate is medium-bodied with firm, almost rigid tannin. The acidity is well judged and lends this a sense of natural balance and poise, which particularly comes through on the tensile finish. This is a very fine Clos Vougeot made with a deft hand.

$239/bottle
90 points, Wine Advocate
Tasted blind at the annual “Burgfest” tasting in Beaune. The 2012 Chambertin Clos de Bèze Grand Cru from Bouchard Père et Fils has an earthy, rather subdued nose that lacks the complexity and the energy displayed by Rousseau’s Clos-de-Bèze 2012. There is something a little dour here. The palate is reduced on the entry although there seems to be decent substance underneath. Chewy and rustic, this needs to nurture more finesse and precision, though it would not surprise me if time smooths out the edges. Dumb phase? Quite possibly.